‘Running with the Reindeer’ among other things

I ran with a diverse crowd on Saturday.  Just what brings together Sweeney Todd, Santa Claus, Tarzan, and a penguin?  Not alcohol in my case.  (I can’t speak for the others, but I did smell alcohol on the breath of a few Steelers fans.)  A fundraiser (emphasis on fun) for kids, drew the Last Frontier Gardener out of her winter coma cocoon for a little exercise.  With ungulates. 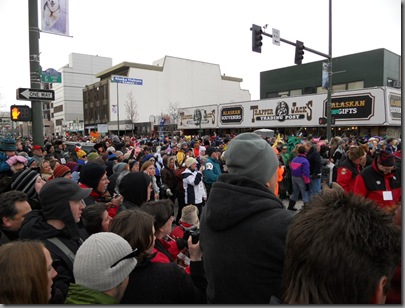 A relative newcomer to the Fur Rendezvous proceedings, Running with the Reindeer, as I explained to a fine employee of Subway later that evening, actually involves people running with the reindeer.  She thought it was just reindeer running down the street (and was confused when she saw a bib number on my shirt).  What’s the fun in that?  Potential goring or trampling has to be involved to get Alaskans riled up.  And undressed. 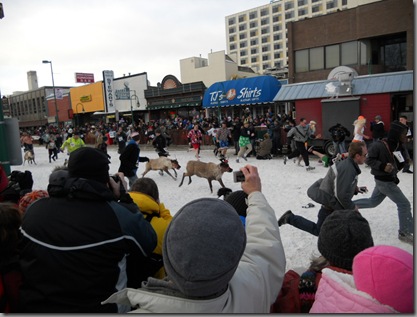 If you are scratching your head about “Fur Rondy”, catch up here and here, and if you must, at the official Rondy site here.  A mere three or four city blocks of a sprint (is that like a 0.5K?) that would hardly wind a four year-old had me in stitches by the end.  And reindeer are most certainly not the hulking, angry bulls of Spain’s famous street runs.  They have actual fatalities and serious injuries there.  The worst we can claim is men clad in fur jock straps perhaps burning the retinas of spectators.  No one told me it was a costume party!  Next year, I’m dressing as a rutabaga. 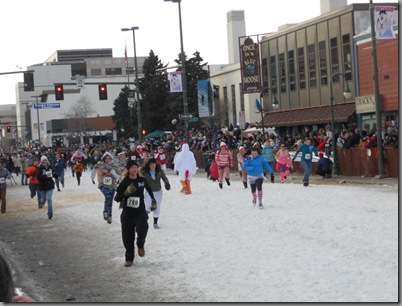 I didn’t see any scantily clad women, so I must conclude women are either 1. less tolerant of cold, 2. more modest in dress, 3. smarter, or 4. less juiced up.  I did, however, see a large group of male Aussies in nothing but fur thongs and tattoos (am I the only one left on earth without one?), a large group of men deemed “Spartacuses” by the crowd, and a loner in a postcard-sized green thong.  It was 20 degrees Fahrenheit, or about 7 Celsius. 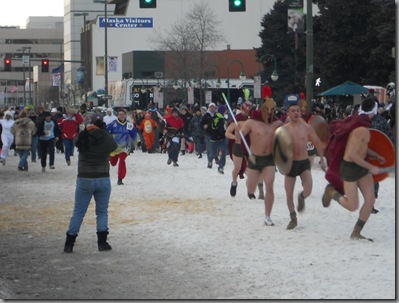 One bad thing about the races, too few reindeer in proportion to runners.  Now the LFG is wily and cunning, so she weaseled her way to the middle of the pack and the middle of the street.  We women (there were three heats, men, women, and groups) were given a ten second head start by the DJ, and though the LFG was muttering under her breath about bigots, double standards, dark ages, and DJ’s, she got her medicine in the end. 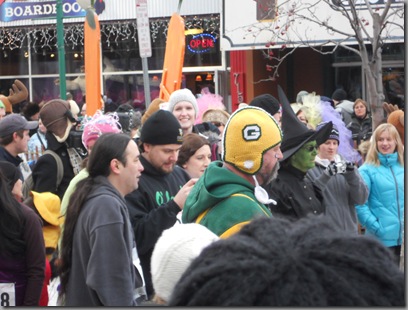 I wanted to be touched by a reindeer.  After watching people run too fast, too slow, or not at all and hardly see a reindeer during their run, I devised my plan.  “Be pushy and practice some crowd threading to gain the place I wanted.”  As I am tall, I think I intimidated most of the people inclined to say, “Hey!” or worse.   I got into my best Apolo Anton Ohno speed skating stance, and 3-2-1, we were off.

Shrieking from some runners, and the clopping of hooves.  Next thing I know a reindeer barrels into me, pushing me to the left.  Hard.  And then, another.  Success!  It may have been the adrenaline speaking, but those beasts looked shoulder height and about 2000 pounds.  They might have had fangs, too, I’m not sure. 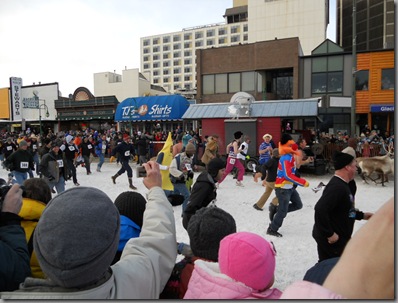 The LFG husband is fired as head cinematographer/photographer.  After I finished my race and found him and the kids on the sidewalk (harder than it sounds, there were at least five hundred other tall guys with kids wearing red coats), he looked at me and said, not ‘you were great’ or even ‘I saw you get bumped!’  No, no, he said, “Did you already race?”  I regret to inform you no photographic evidence exists of my brush with death, but maybe I’ll smarten up next year and give the camera to my 10 year-old.

written by Christine B. for Last Frontier Garden blog