There's one truism about goody bags: there's never enough. OK, there's two truisms. The other is no one wants to share. I'm not speaking of kid's birthday party goody bags specifically, but I think the point holds anywhere free, undeserved handouts are in the offing. I suppose tantrums and headaches are a part of the goody bag cycle, too. (I'll let you know if that last bit holds true for adults after a wedding later this month.)  After going over my (100 or so) pictures and goodies from the 2010 Northwest Flower and Garden Show in Seattle, I decided I would have to break my (completely biased and mostly factual) report up into two parts: goods and services, otherwise known as "stuff you could buy" and display gardens and presentations, otherwise known as "stuff you couldn't buy" (for next week). 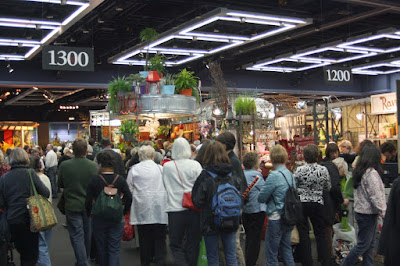 I was not the only one eager to troll the aisles.
There were plenty of goodies to be had at the show, from whirligigs, water fountains, and windchimes to trees, t-shirts, and trowels.  Some unexpected offerings: rocks, both the small and gigantic versions. 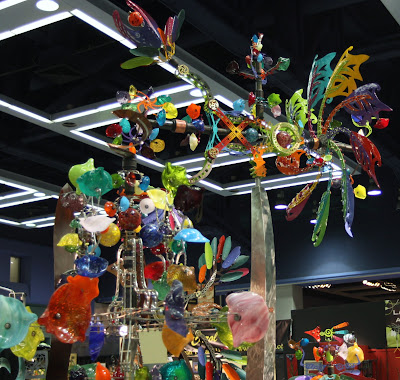 A fun glass windmill/whirligig art booth where I couldn't afford anything.... 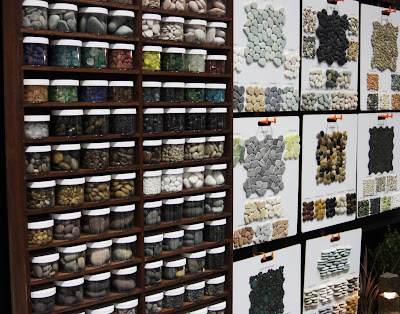 Loved the colors at this booth.  Alas, I already had one rock to pack home.... 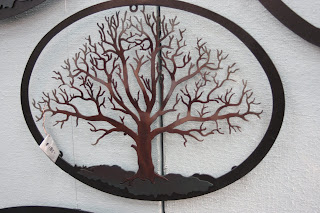 What half the trees look like in Alaska in winter: no green.  Not that nice copper color though. 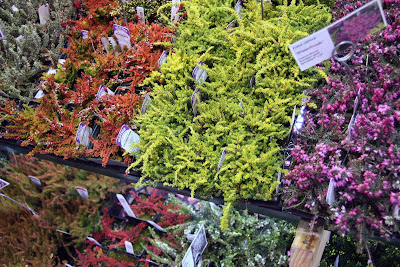 I was so tempted by this heather nusery and am regretting not bringing one or ten home. 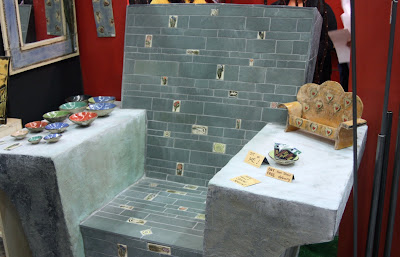 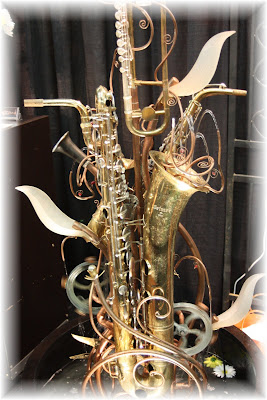 I think Bill Clinton would love this water fountain.  The vendor made fountains and feeders out of brass instruments.  Never seen anything like it. 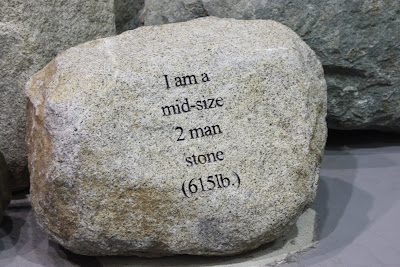 I would have loved to add this to my rock collection.  I'm sure the stoneyard intended them to be informational, but the inscribed stones were humorous as well.  There was also a "one man stone", a "3/4 ton stone", and a "one ton stone." 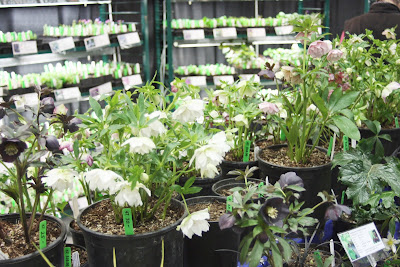 Hellebores were extremely popular at both the plant vendors and in the display gardens, where it was used to great effect.  H. 'Ivory Prince' has been sulking in my garden for a few years now.  I really must devote myself to finding a better place for it or some more lively companions.
Keeping in mind I was trying to be disciplined in my acquisitions, my meager goody bag contents from the show were as follows (see I'm sharing my goody bag, aren't you proud?): 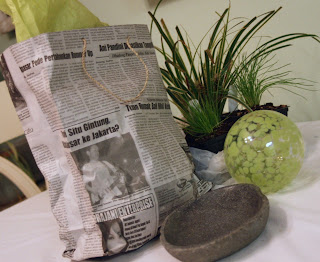 Acutally, this is not quite all.  I chucked the two lily bulbs in the veggie crisper and the glass art had to be shipped separate.  Wouldn't fit in the old carry-on. 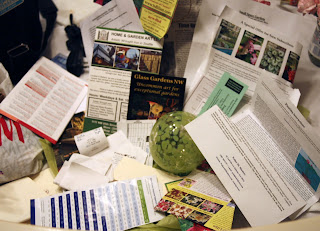 Rubbish.  Or the"mulch" in my carry-on bag, if you prefer.
I think I avoided the goody bag evil of tantrums only because no sugar was involved.  I entered to win the trip to Hawaii at an ATM-looking machine in the convention center: suprise, I didn't win.  However the machine did spew out about ten coupons for things I couldn't use ("free scissors from Fiskars, collect at booth XYZ", now how would I explain them to those nice security people at the airport?).  The coupons in addition to receipts and literature I just had to have, made for quite a pile of papers, pictured above. 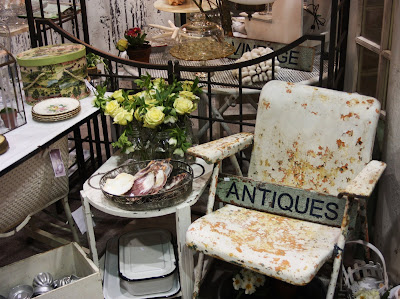 This booth displayed their products to good effect!
I thought I was quite restrained given the circumstances.  Three plants in pots (to be used in my ornamental grass presentations this spring), two Lilium bulbs (gifts for friends), a glass orb for the fountain, and a small rock basin for the birds.  I felt pretty confident I could fit all that into my carry-on bag.  And then I made that fateful stop at the blown glass and copper stake booth.  Next thing I know, I'm signing my life away via credit card and having in all shipped home.  (Oh, well done, Christine, very restrained....)  I was also tempted by the giant moose made of salvaged metal, pictured below.  Maybe next year. 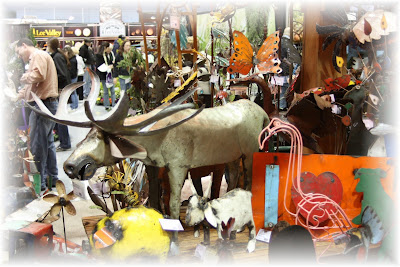 So the goodies were this week, and I'll be sharing the gardens and lectures presentations next week.  It'll take that long to recover from sitting in a middle seat in the airplane.  Envision, if you will: one young neighbor spit shining (truly!) his i-pod before lovingly placing it in an i-pod fanny pack and the other ear-plug wearing neighbor continuously bumping me with elbow and foot.  I consider myself an understanding traveller, but after the tenth time, I stepped on his foot.  Hard. 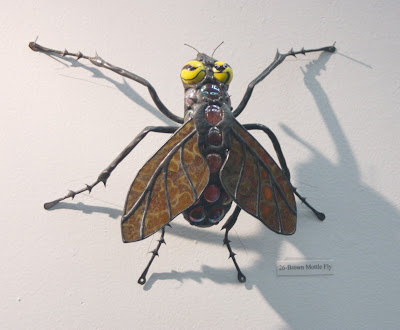 I have quite a few insect art objects in my garden. Just my luck: very fun but very expensive!
I keep forgetting the most important aspect of air travel (in my humble opinion): "never wear a turtleneck on the plane", which edged out close seconds "don't wear wool socks to a warmer climate" and "don't drink a bottle of water before boarding".  What's your travel tip?