Those trees growing in my yard: Anchorage edition

A few people have requested a post about the native trees in their yards. There aren’t that many trees and large shrubs native to the Anchorage area. If it’s tall and growing in your backyard and you want to know what it is, you’ve come to the right place. Or if I missed one, you all will let me know. 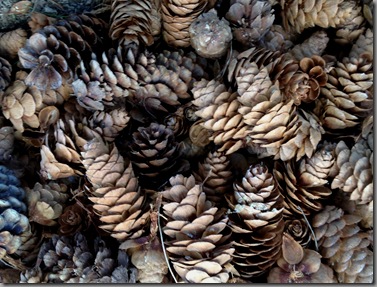 1. White spruce, Picea glauca. The shaggy Christmas tree in high heels. If it doesn’t lose it’s leaves in the winter and it’s a tall, native tree, the answer is spruce. Usually quite a bit taller than wide, especially with age. Needles are shades of green, sometimes with a bluish cast. 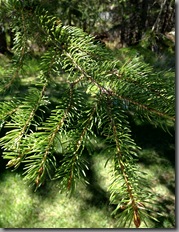 2. Black spruce, Picea mariana. The ugly stepsister of the white spruce. It’s charms are somewhat, shall we say, subdued. Well, I would be too if I had to grow in a swamp. If it looks scrawny, spindly, and half dead and it’s growing in a low, poorly drained spot, it might be a black spruce. Doesn’t get as tall as the white spruce.

3. Cottonwood, Populus trichocarpa. The one that grows about 8 feet a year and drops twigs, branches, leaves, etc. at any time and for any reason. If it’s “snowing” in July, it’s a cottonwood. Last year, the air was thick with little white fluffs for several days. Trees are either male or female. Do not park your Ferrari under this one on a regular basis unless you were going to have it repainted anyway. Other cottonwoods call Alaska home. Do think twice about planting this. 4. Birch, Betula spp. A couple of different varieties of the tree forms, but for our purposes, just birch. Hosts monster aphid parties every year, has white, peach, gray, brown or any-combination-thereof-colored bark. If there is a new pest in town, it will move into the birch hotel for a stay. Keep this one watered if you plant it or things can get ugly…real ugly. Sometimes a very respectable yellow gold leaf in autumn. 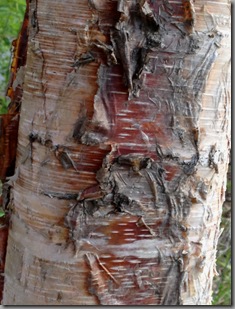 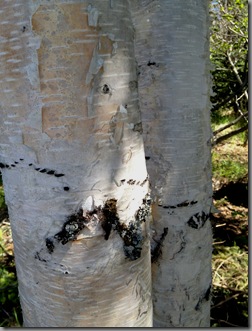 5. Willow, Salix spp. We have scads of kinds, from wee baby willows to big daddy willows. If the bark has been sampled by the moose on a yearly basis, then it’s probably a willow. In fact, one sure way to tell (besides the silver, furry catkins covering the branch tops in March) if it’s a willow is the 45 degree angle of the trunk or branch where it’s been snapped over by said giant ungulate. Leaves usually longer than wide, sometimes remarkably so, bark gray. 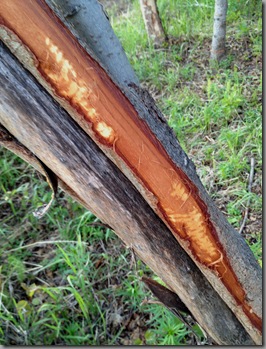 6. Alder, Alnus spp. The shrub that is too big to be a shrub. When I think shrub I think 8 feet max, though I realize this is not true and the dividing line is around 30 feet botanically. If it has 6 trunks instead of one, that’s a clue. Also the lenticels on the bark, sort of light colored marks that function like pores. Check for itty bitty pine cone looking things that are in fact called female catkins (or cones, or conelets, take your pick). If your kid wants to climb the almost diagonal limbs of some 30 foot shrub, it might be an alder. 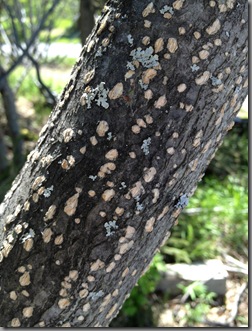 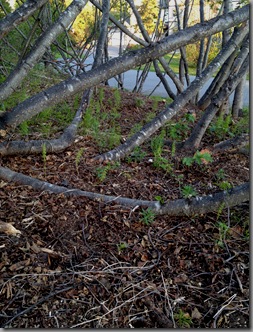 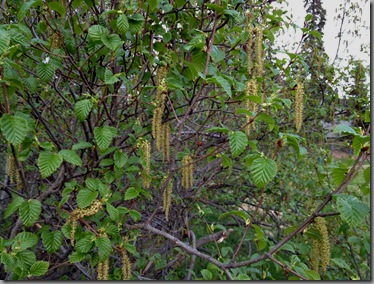 7. Red Elderberry, Sambucus racemosa. Definitely a moderately sized shrub, not really in the same category as the big ones, but it has annoyed me so much this spring that I am including it in the hopes some of you have chainsaws and less than tender hearts. Leave this one alone if it’s in an out of the way spot or you enjoy yearly pruning. I had two in my last garden (planted by robins, not me) that made spectacular informal hedges with yearly trimming. 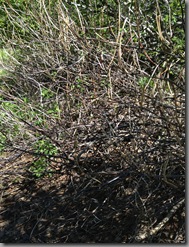 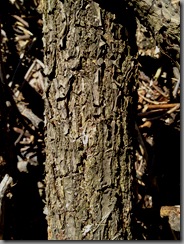 With great age (which for this shrub counts as about 15 years) can become a tough, sprawling monster, but branches only a year or two old are easily breakable. Kids adore making scepters, swords, and buggy whips from the younger wood. I have been whipped a few times while hauling brush and yes, it does hurt. One of the first shrubs to leaf out in the spring, white flowers, wood smells unpleasant if broken or bruised. Robins eat the berries but you shouldn’t. 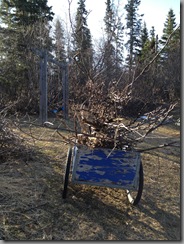 I have been busy in the yard, have you? Or did I miss any common native Anchorage trees?