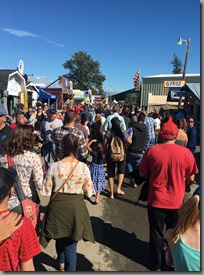 Well, it’s that time of year again. The Alaska State Fair is in full swing, and being the die-hard fair goer that I am (see here for prior coverage), it wasn’t a question of if, but when. Saturday, August 27 was the day, and along with 50,000 or so of my fellow Alaskans (oh all right, I did see a car with a license plate from Canada in fair traffic) packed it up and drove the miles to stand in lines, spend too much (honestly, a corn dog for $8!?), and eat too much (see aforementioned corn dog plus other things I would rather forget). 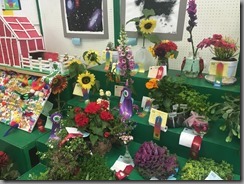 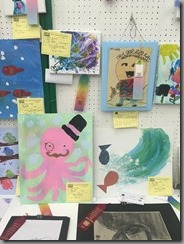 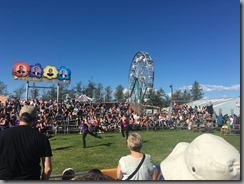 So maybe I’m exaggerating about the number of attendees last Saturday, but it felt very packed. I noticed an unusual amount of people using carts, crutches, and canes to get around, and finally realized, with my usual quick wit, that it must be Family Day at the fair. No, that’s really a Day there, and kids get in free. Maybe Seniors, too, cuz old folks were everywhere! I would have invited my grandma, but she is about 2,000 miles away and spent her Saturday watching a tractor parade. Oh la la. 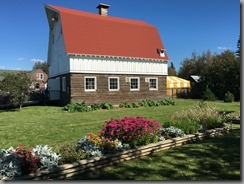 I tell you what, when I’m my grandparents age, there won’t be a single soul on Earth that can convince me to march, mingle, and get mashed on the hard pavement amongst the green-haired kiddies, strollers running over my feet, and smell of grease. I will sit on a bench and eat a turkey leg (that booth always has a long line when I walk by hungry) and holler at my grandkids instead. I can’t wait. 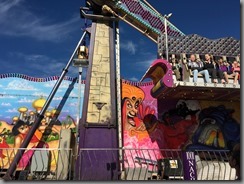 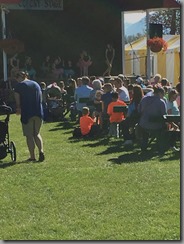 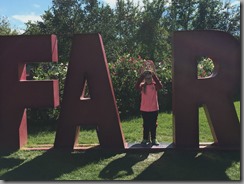 We got up early on Saturday, and after a few well deserved hints to the kids to get moving, pack up their raincoats, and use the toilet, we departed only an hour behind schedule. But about 300 cars behind schedule, too. The traffic past the Wasilla/Palmer freeway turnoff was not quite horrendous but well past dreadful.

We groaned and griped all the way through the back end of Palmer (look kids, potatoes!) until we parked the car and turned off the engine. After a reminder that I wasn’t going to carry the “backpack of necessities” the whole time like last year, like some sad Sherpa for my lazy kids, we entered the gates…after standing in line for a very long time to get to those gates. No really, it gets fun now. 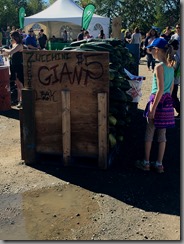 So where was I? Oh yeah. All my fellow Alaskans (and Canadians) at the fair. It was sunny, so my pictures are nothing special, but the flowers at the fair always put other public displays around Alaska to shame. Honestly, why doesn’t Anchorage hire the gal that designs all this? Everything from matchy, matchy to humorous to sublime. 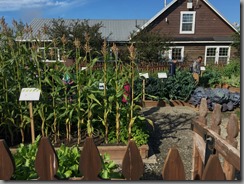 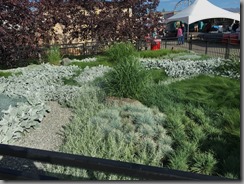 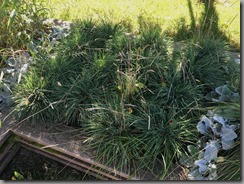 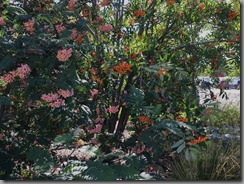 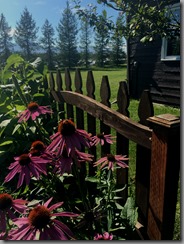 I note the walled perennial garden is still aptly called “Perennial Garden” and am shocked it hasn’t been named after some politician or corporate sponsor. Our Alaskan legislators aren’t fixing our dreadful budget mess, so I’m sure they’ll have plenty of time to debate names for it this next session. I suggest christening it the “Beat it kids, I’m trying to take a siesta” Garden. Must be over 30 to enter. 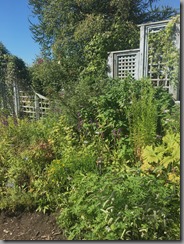 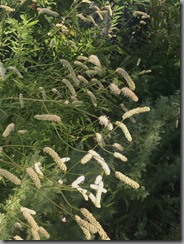 1. PowerHouse percussive dance routine. Holy smokes, that kid, “Pee Wee,” can dance! Don’t miss all the clogging, tapping, and stomping. It’s free, which is nice because you already have to choose between a semester of college and that cheeseburger. 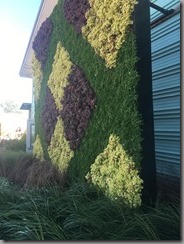 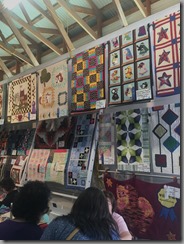 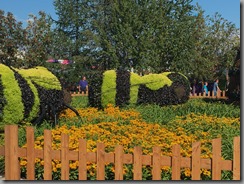 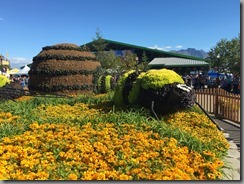 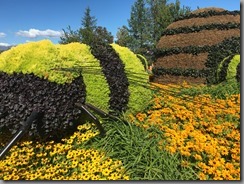 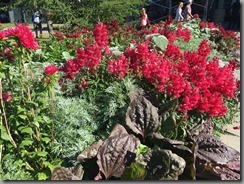 2. The gardens. The beehive and the quilt (pics above) were some of my faves. For some reason, the giant vegetables didn’t really thrill me this year. Meh.

3. The chick incubator tub. Don’t pick up the chicks! And I included my kids in that admonition. We already have 3 chickens at home, which is probably 3 too many.

4. The food. Ok, some of the food. A long line doesn’t necessarily mean the food is worth it. It just may mean your kid is screaming and you want to plug that hole with the nearest (fill in the blank food).

2. Not enough places to sit. They have been making improvements, but after 5 hours of pounding the blacktop, we need more places to park our sorry, tired selves.

3. The prices. I spent $100 on tickets: not to the opera, internationally known band, or all day waterpark venue, but for four rides for 4 kids, plus some games and food tickets we didn’t really want that came with the package. What a racket!

It’s 6 tickets for most of the big kid/adult rides, which is way, way up from the 2 or 3 tickets from my Pleistocene childhood, but still, I ask you, 6 tickets? The $8 corn dog is indefensible, but I did buy and eat it, so what does that say about me?

4. Not enough cute baby animals in the livestock area. Fooey. All right, all right, the little goats were cute.

So get up early, pack the hand sanitizer and sunscreen/raincoat (look out the window first to pick which), and head out to Palmer. The Fair runs until September 5. Don’t forget to cash out that 401(k) first if you want to eat.

Outrageous prices? Fairs you won’t do without? What’s your report on the fair in your neck of the woods?

That movie where the birds attack

Yes, I’m still alive and kicking. It’s been so long since my last post, that I’ve had a dickens of a time figuring out my password. I had to uninstall and reinstall programs, for goodness sake. The formatting looks strange to me, too. Anyhoo, we’re still gardening here in the Greatland. I’m not bragging about where I live, that’s really a nickname for Alaska.

Last year we were given, with no prior notice, some live animals. Yes, this paragraph can only get more horrifying, so buckle up. A car drove up the to the house. A car trunk was opened. Most unfortunately, in an unguarded moment, my garage door was open. Into this garage (and from the car in the driveway) were placed 4 chicks, a handful of feed, and a water dish. They were in a small cardboard box. Since people have been killed on slighter provocation than a drive by insta-pet dump, you’d think this person (a relative) would know better, but you have relatives like that too, don’t you?

So we have three chickens now in our garden. Those are the first, and most important birds of note in my garden, according to time and money spent, worry accorded, and noisy racket generated. We do get eggs, so I suppose that’s a consolation of sorts. Our brown chicken, Duck, eats slugs as well, so that’s nice. P.S. A child decided on the name for our chicken named Duck, so don’t judge me. 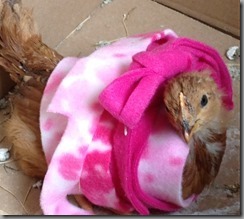 The second birds of note this summer are the “Charlies,” a slightly less technical but more affectionate term for the Stellar’s jays, Cyanocitta stelleri, that case our joint about once a day. My grandmother, Ruth, called every Blue jay in her Portland, Oregon backyard “Charlie,” so it has become a tradition for me with the Blue jay’s Alaska dwelling cousin. When I was a child, she told me jays always came in threes, Charlie and his two girlfriends. I have found that to be very often true. Sometimes just one jay, sometimes four, but most often three.

Jays are noisy and capable of making sounds that defy imitation, so instead of trying to talk to them in faux bird-talk, like I do the chickadees, I just holler, “Here Charlie!” That seems to work, as Charlie will take an unshelled peanut from my hand. The other three Charlies (fledglings, I suspect, or maybe they don’t like the look of me) are too shy to do more than land on my deck railing and look wistfully at the peanut in my hand, and make popping or scratching noises to the brave Charlie.

A note to those interested in taming a Charlie: they have trained me and my two children to run to the bag of peanuts any time we hear their squawk or see them sitting on the rail. Sometimes they will fly up to the window if they see me inside and brush the window with their wings to get my attention. They’re pushy like that.

The third bird of note is the giant buzzard that has been hanging around the swing set, a good perching place for checking out the chickens. “Giant Buzzard” is the lazy person’s Latin for Bubo virginianus, or the Great Horned Owl. He showed up with much fanfare in the form of shouted alerts from my kids about chicken safety, or lack thereof. He also showed up with much poo. On my roof namely, but also my wooden decking. Never fear, the chicken pen was hastily (much in the manner of grave robbers working through the rainy night) covered in netting, and the owl was foiled. The poo was removed by scrubbing. Fooey. 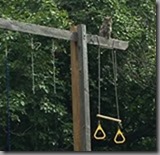 I know you’re thinking, that’s a lot of bird adventures for one garden, but wait, there’s more. Other than the hawks scoping out the chickens in the form of dive bombing, which we will not mention, because they are never still long enough for a photo, we had one other cool sighting this summer (yeah, I say that like summer is over because, Anchorage, it is) of a hummingbird. Which is no biggie for you California or Oregon gardeners, but a cool and unusual sight for most Alaskans. It is so unusual for me (as a lifelong southcentral Alaskan, I’ve only seen two other sightings) to see one, that I didn’t know what I was looking at, at first glance. I thought the wind was moving some Lamium stems unusually fast. Nope, it was the first sighting of the little tyke, which hung around for about a week in late June, justifying all that red, pink, and purple Penstemon I planted everywhere. See if you can spot it perched on my tree cage (stupid moose, grumble, grumble). 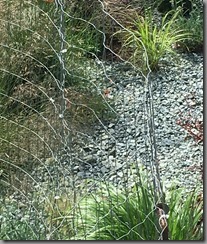 So the bird season here is winding down, at least in this garden. Chicks fledged, robins mostly gone, feeder birds gearing up for the big vamoose back to warmer climes. It will be interesting to see what birds show up next year if we have another warm summer (please, oh please, yes).

What birds were hanging around your garden? Any unusual avian visitors?