The “Grump’s Guide” to Christmas music

No matter how cold it is where you live, Alaskans have it worse. I take special pride in having survived another morning (this one at -12° F/-24° C) at these temperatures. After a recent hour-long walk outdoors (don’t worry, I won’t do that again!) I had aged about thirty years with fully frost-encrusted hair, eyelashes, and eyebrows. I say nothing of the frozen snot. 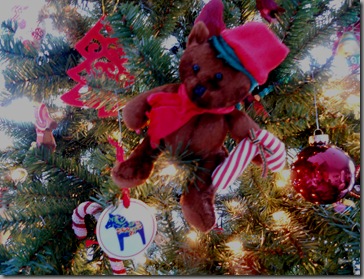 I choose to take pride in this awful weather because my misery is best saved for January and February, the traditional times of frigid cold. It’s hard to find anything to be glad about when the temperature is hovering on the wrong side of 0° Fahrenheit. But I persevere, for your sake at least, and have found ten things in which to rejoice…or not.

10. I’ve have, thus far, been exposed to only one country music Christmas song.

9. There are no curse words or crude phrasing in Christmas songs. I’ve lunged for the volume in the car when pop music becomes a little too frank. “You want to do what to whom?! Good grief, I have kids in the car, get a room! And stay off the lawn!” The objectionable bit about Christmas music lyrics is the whining about how many gifts the singer deserves.

8. The grocery stores (which I note have started playing background music) forgot to change their regularly scheduled music to Christmas music. So I can still enjoy Sir Mix-a-Lot whilst shopping for deodorant and radishes. Whew! I don’t know how I managed to shop for essentials without the thrum and thump of music.

6. Elevator music in December: another reason to take the stairs.

5. Are we living through a golden age for Christmas recordings? If Ella, Bing, Eartha, and Frank are the high bar for Christmas singers, where should Monsieur Bolton, the Dave Matthews Band, Hanson, Miss Jessica Simpson, Twisted Sister, and the New Kids on the Block be placed? I’m thinking ankle high, but that’s just me. I make an exception for Enya. She’s not taking a dirt nap, and can still rock a Christmas song. Any other living singers make the high bar? You tell me, I don’t get out much.

And if the Sinatra decades were the Christmas golden years, I must mention those that were solid tin. The 1980’s were the epicenter of the mess, and I include a good portion of the 70’s and 90’s in the unpleasant aftershocks. If I hear George Michael breathlessly regret that “Last Christmas” I gave you my heart, just one more time, I won’t be responsible for the ensuing destruction of the nearest electronic equipment. Get over it, George, and just try to concentrate on whether you are in the proper mood for buying gifts (see number 3). And will I ever forgive Paul McCartney for his crime of “Simply Having a Wonderful Christmas Time?”

4. Christmas songs can have such though provoking titles. My personal favorite is not “I Want a Hippopotamus for Christmas,” “A Chipmunk Christmas,” or even “I’m Getting Nuttin’ for Christmas.” No, the winner for me is “What Can You Get a Wookie for Christmas?” I’m not specifying what those provoked thoughts are in this case, and whether they be fit for public consumption, but I’ll just hint that George Lucas should be horsewhipped with a wet noodle.

3. Christmas creep, or retailers starting up the festivities earlier every year, will soon become so bad that the decorations will be left up year ‘round. Thus their objective, which (as Wikipedia tells us) is nothing short of world domination but PR spins as just “putting shoppers in the proper mood for buying gifts,” will be accomplished.

If the proper mood is a pathological hatred for: red and green swags, ringing bells, the maudlin holiday warbling of hung-over singers, and what seems like every available Alaskan plus all their out-of-town extended family at the shopping mall/on the road, then mission accomplished! Merry Christmas to you, too! And Happy Easter while I’m at it.

2. We still have a local station that plays only classical music, KLEF 98.1 FM. This translates into no pop Christmas tunes when the time comes (and it does come) to play Christmas music. Christmas songs in Latin from a boy’s choir? Ah, blessed relief. At least I think they are Christmas songs. My Latin, alas, is a little rusty and mostly confined to scientific terms. I suppose they could be lamenting a la George, the unworthy soul they gave their hearts to last Christmas, but at least I can’t understand them.

1. It will all be over in less than a month. December 26th is hereby proclaimed as “Auditory Sanity Reclamation Day.” Hurrah! Watch for people twitching in the void as Sir Mix-a-Lot plays softly in the background.

Did I miss anything in the Grump’s Guide to Christmas Music? Your favorite song? Worst ever song?