We are having a remarkable winter here in Alaska. My swamp-dwelling sister in the southern USA is enjoying colder weather. You read that correctly. Alaska is warmer that most of the nation. Cue the music from the Twilight Zone now.

Yep, it’s a heat wave, or climate change, or whatever. I have never seen green grass at the end of November in Anchorage before, and I’ve been here forever. Our lawns are typically covered with a foot or more of snow, not up for mowing consideration! (If you were wondering, the answer was no. The mower was put to bed for the year.) I even inserted those tall, orange, reflective pole guides through the garden for the snow blower (don’t ask)!

Yet here we are. What to do? The alpine skiers are getting desperate. The cross country ski types had a least a thin base to ski on the trails, for a while. It’s pretty spotty to non existent in my part of town. There’s always ice skating. Two years ago at this time I was skating on glass ice at Finger Lake in Palmer, Alaska. I could literally see fish frozen in the ice it was so crystal clear. Aside: When skating on lakes here, one can’t be the nervous type and truly enjoy it. There will be cracking noises. Sometimes very disturbing ones. Like the cracks and booms are having a conversation together. “Look at that fool! Let’s make her wish she had never laced her skates! Ha ha! Crack! Boom! Creak!” Last week a friend told me her son had fallen in to his thighs at Potter’s Marsh while ice skating. I guess it’s true. We are getting warmer.

My studded tires, which were installed the moment I suspected the snow wouldn’t melt away, are now just loud and useless as I roar down the freeway. I don’t dare take them off though. That would be tempting fate.

I would be more excited if the killing frost date was pushed back in proportion to the warm weather now. As it is, everything died at the typical time, and now it’s just dead stuff with no snow. Which is how it is in other, more southerly locales, I guess. At least the Halloween jack-o-lanterns used to freeze so I could easily heave them into the yard for the moose to graze. Not so much now. Eew. 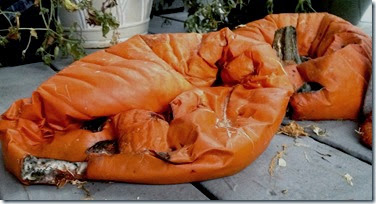 How’s the weather? Is your area experiencing some strange temperatures?