Bunny Boots: the choice of champions (in Alaska)

Or at least, the choice of those that want to keep all ten toes during cold weather.  And no, they aren’t made of bunnies, though they could resemble two obese ones if you squint your eyes.  I was a skeptic too, until last winter (and my first road test).  My laugh of derision would echo through the house every time I saw the LFG hubby’s bunny boots, otherwise known as Extreme Cold Vapor Barrier Boots.  He has three pairs, two the standard white (Type 2), and one black (Type 1).  All ugly, real ugly. 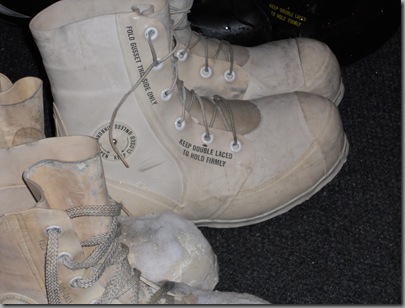 Yet it seemed determined by fate that my laugh would not be the last one heard around the house.  Until very recently, my boot collection consisted of several stylish boots from different outdoor clothing merchants.  They looked cool.  They also, most unfortunately, felt cool after a time.  I am not a hardcore outdoorswoman in winter or summer.  Venturing outside in 10 degrees Fahrenheit to ride a snowmachine at x mph (I can’t say just how fast, you’d never believe I was in my right mind) is not the high point of the year, but I’m married to someone that thinks it is, so I step outside on occasion and join him in my subpar non-bunnies.

Now some facts I picked up while doing ACTUAL RESEARCH, SORT OF.  Take a deep breath, I amazed even myself with the depth of scholarship in this post.  The Type 1 bunny boot, the black Mickey Mouse boot, is rated to –20F.  I can’t conceive of an instance that I would need a lower rating than that, but this is Alaska, so it’s possible.  For those more adventurous/stupid, Type 2, the white boot, is rated for –64F.  And if you need colder than that, you are either mental or a polar bear. 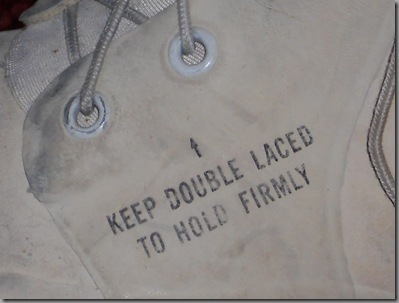 Bunny boots make one feel like quite the nitwit.  They have instructions written on the outside of the boot in several places.  It’s as if the manufacturer couldn’t be sure wearers weren’t of the litigious ilk of that woman that sued McDonald’s for millions because she spilled hot coffee in her lap.  Hot coffee, imagine that.  So I imagine the lot that produce these boots are thinking along those lines.  “We can’t be sure some stupid fool won’t __________.”  You fill in the blank.

I think the corporate lawyers (in conjunction with a preschool teacher) designed such printed basics as: keep double laced to hold firmly.  And I refuse to consider why it would read “Keep closed unless airborne” unless they are thinking of a body hurtling over the snowmachine handlebars.  “Oh, I am going to hit that tree and go flying.  Best I open up that little air valve thing-y right now!”  Can you imagine trying to get through airport security wearing these babies?  And don’t even think of folding the gusset the wrong way because wearers are commanded to “fold gusset this side only.” 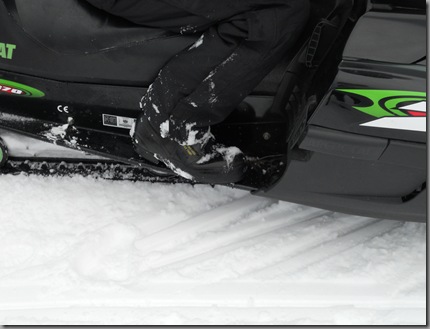 An article about the history of bunny boots explains all: they were originally meant for the United States military, hence all the directions and great fashion forward style.  I note the article reads, “Bunny boots are very popular in Alaska.”  I looked in vain for a footnote that read “Amongst rabid snowmachiners and those individuals possessing a Y chromosome,” but that seems to be an omission in an otherwise quite scholarly article.  The above picture is an action shot of a snowmachiner wearing the black bunnies.  Exciting, no? 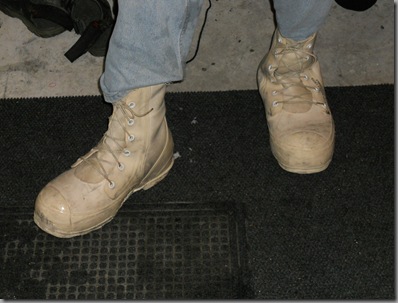 If I had to categorize ugly boots, bunny boots would definitely be in the top ten, along with Ugg boots (aka “Make your foot look like a big duck foot for under two hundred dollars”) and moon boots, which for those of us that remember their heyday in the eighties, laugh at the resurgence in popularity.  Or at least, I hope we do.  I still haven’t forgiven mother for buying me a navy pair in grade school.  And now I have Santa to blame for my new black Mickey Mouse bunny boots.

Any bunny boots in your closet?  What are the ugliest boots you’ve ever owned or seen?