You Can Find the Fur Rendezvous Here

My hometown of Anchorage, Alaska, is the place to be to enjoy the one and only Fur Rendezvous.  Actually, I'm not entirely sure that it's the ONLY gathering of this type, but I'm guessing, due to lawyers and all, it's the only one officially called "Fur Rendezvous." 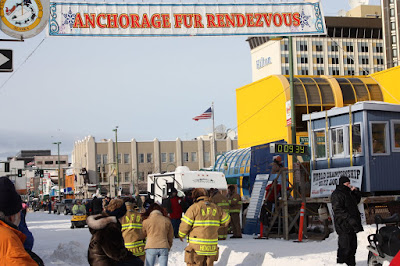 For those that don't speak Athabascan (or is it French?), it's a yearly tradition started in 1935, where Alaskans gather to swap furs, race dogs, and play hockey.  Apparently the name is just too intimidating to pronounce and so it is affectionately referred to as "Fur Rondy" or just "Rondy."  I remember attending Rondy during my childhood and it was always a much anticipated time of year, especially the parade.  Is there a kid in this world who doesn't love a parade? 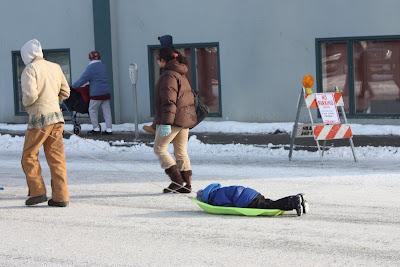 Apparently the answer is "yes."  This little guy was even in the parade and couldn't deal with it. 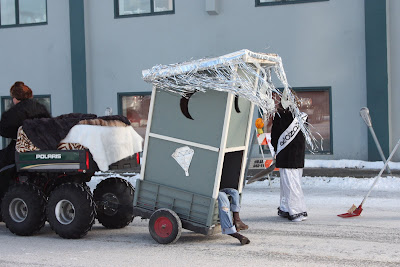 The only thing I saw more of than fur on Saturday, was portable toilets.  This homemade specimen was delightful. 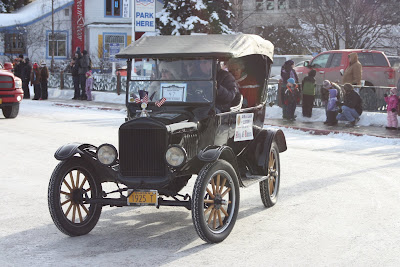 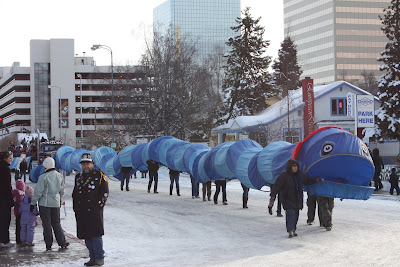 Iceworm, and on the lower left, in black, a rondy" keystone kop".  I used to be terrified they would put me in the jail-on-wheels when I was a kid.  If you are not wearing a rondy pin, you get tossed in jail.  This year, I told them to throw me in jail, I wasn't able to buy a pin. Unfortunately, the jail had gone around the corner by then and the rondy kops said I missed my chance.  Drat! 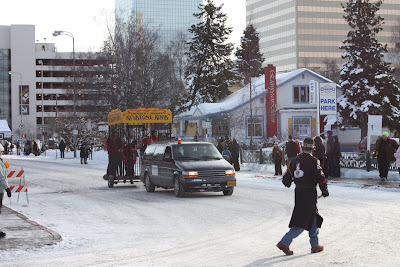 I remember the jail being bigger and full of surly old folks.  Perhaps too many children had fits and they had to fill the jail with cheerful teenaged attendants, seen above.  Keystone kop pictured at lower right.  Menacing, aren't they?
We've modernized a bit, judging from this year's schedule, (which can be found at the Anchorage Daily News website) and now have outhouse races, bingo, and snowshoe softball.  And lest I forget a new and popular event, "Running with the Reindeer": the cold north's version of the bull running in Pamplona.  No one, so far as I've heard, has been gored or stomped, but I think people have slid in the poo and fallen. 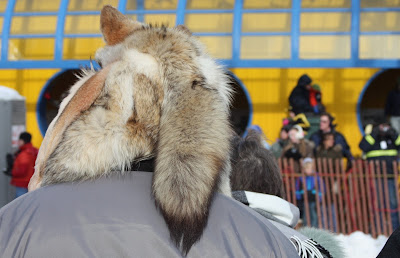 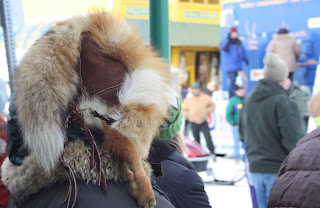 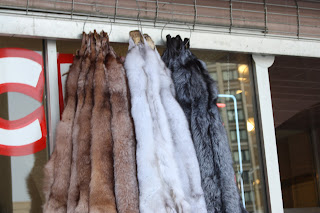 Nowhere else on earth will you see fur displayed in such quantity outside of a zoo.  Davy Crockett's raccoon tail hat has nothing on the fur hats you'll see here.  I saw a gentleman wearing a wolfskin hat complete with a wolf head on the front.  Very eye-catching.  (A brand new sighting for me this year: seal skin gloves.)  And the annual hide and horn auction brings out all types of folks to bid on animal hides seized by the Alaska Fish and Game department, often from illegal hunts or animals killed in defense of life or property.  I stopped by last year and it was a kaleidoscope of almost every fur bearing animal I have ever seen in Alaska.  I don't think I saw any squirrels, but I could be wrong.  Lynx, bears of multiple colors, rabbits, wolves, foxes, etc.  That's just one auction.  The downtown merchants were out in force with fur hats, coats, and in one shop that's hard to miss: a fur bikini (I wonder just how one would launder a fur bathing suit?). 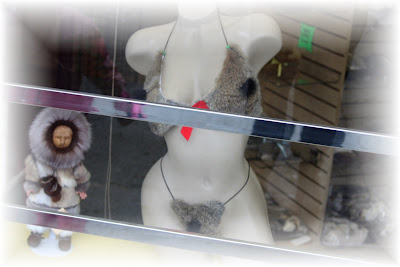 I guess no one has figured out how to clean this bikini.  It's still for sale....
One event I always try to attend is the Rondy World Championship Sled Dog Races.  A part of downtown is blocked off to vehicles and the streets are covered in snow for the race.  (Also, the weather usually cooperates by being bitterly cold, say under 20 degrees F, and windy.)  I have never seen happier dogs in my life than the dogs in harness waiting to start their run.  The teams I saw on Saturday were bursting with energy and found it hard to wait for their musher to give them the "go" signal.  Second in happiness to the dogs were the kids wandering around pointing out every dog team, dog, and fur hat to their parents.  Nothing quite says "Alaska" like a sled dog race.  At least I'm pretty sure it doesn't say "California" or "Florida."  I remember getting to ride in a dogsled one year as a child (dogsled rides are offered, but not usually by racers) and wondering why the musher brought his rifle.  I imagined wolves tearing us apart or some such scenario.  "Moose," he said, "I bring the gun for moose.  Sometimes they get tangled up in the harness and can stomp or kill the dogs."  It's a moose eat dog world up here. 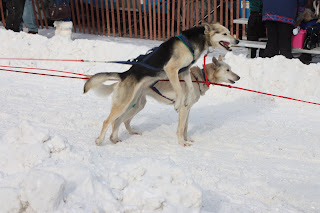 Is it time to go yet? 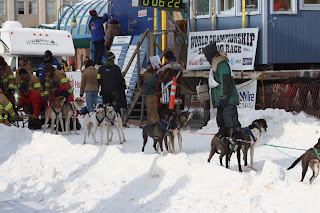 Ground zero for the race.  The starting line.  Teams start at staggered times and race through part of downtown Anchorage, thrilling children and adults alike.
Rondy events I would like to try before I die: the blanket toss, in which a person gets tossed around but mostly up in the air by people holding the giant blanket (which looks pretty fun and kind of scary), the outhouse races, where you drag your own outhouse creation down the street as fast as you can, and ice bowling, which I hope is self explanatory.... 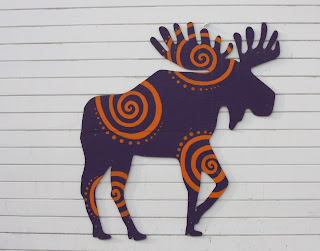 A city moose.  More colorful than its rural cousin.

Other places and climates have such things as watermelon, chile pepper, or cheese festivals.  We have a festival of fur.  So what if I lost the feeling in my right foot, fingertips and left big toe?  At least I was dressed for the weather.  I just felt bad for those out-of-towners like the CNN crew, who were under-dressed in wool belted dress jackets and flannel.  Brrr.  All this hoopla because Alaskans are itching for spring and it's just not here yet.
Mush on! 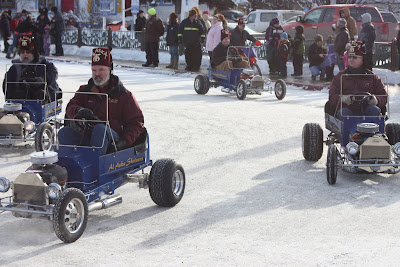 Miniature hot rods on parade.
What festivals do you enjoy in your neck of the woods?