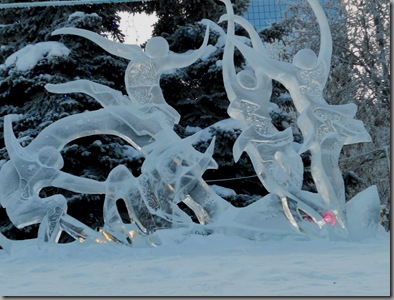 So what do we northern idiots do when the mercury plunges so low that even jaded, long-time Alaskans say,”that can’t be right”?  Why we find something to do outside, of course!  Never mind that hypothermia, frostbite, and windburn are at the back of everyone’s mind.  Out we go! 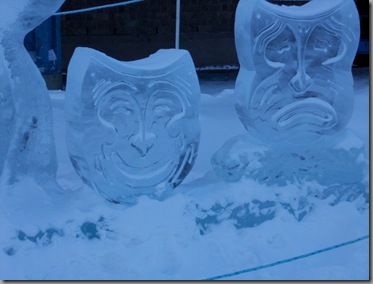 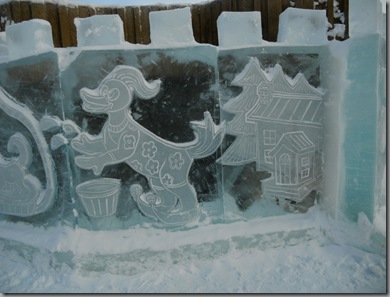 The children resembled sausages in pink, Gore-Tex casings after I was finished bundling them up for our windy, downtown outing a couple of weeks ago.  My look was more “purple marshmallow woman meets Davy Crockett”, but so be it, I was warm.  The husband claimed some mechanical items in the garage needed his urgent attention and so was off the hook (and out of the cold). 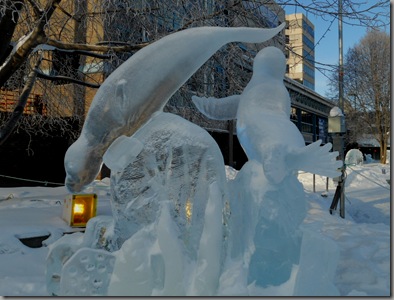 Besides Fur Rendezvous and Running of the Reindeer, there isn’t much going on outdoors in winter that gets me to drive downtown when it’s below zero.  This year was an exception.  Having heard vague whisperings of “ice sculptures” and “Town Square,” I figured we were due for a quick trip to view “The Crystal Gallery of Ice,” sculpted by a handful of gentleman whose names I can’t pronounce (and only assume are from a similarly chilly part of eastern Asia where they groom tots from a young age to whittle on ice cubes, then ice bricks, followed by ice blocks.  Following graduation, an arctic expedition to share their scholarship in that Land of Nearly Perpetual Frozen Water: Alaska.  OK, that’s all nonsense, but I kind of enjoyed my short lived ice carving fantasy).

Fortunately, no melting had occurred (that was a joke, it was literally, to quote Dr. Evil “frickin’ freezing, Mr. Bigglesworth”) and only a dusting of snow slightly obscured the icy figures.  I’m just sorry you won’t be able to experience the heady mixture of numbness in the extremities, wind-stung face, and dash of chattering teeth as you view this post from your heated room.  Stick your head in the freezer for a few minutes for empathy, if you like. 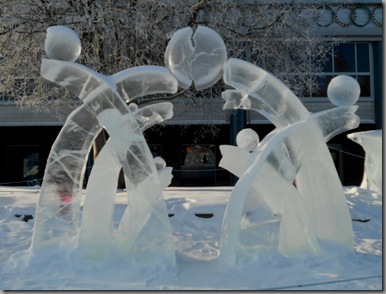 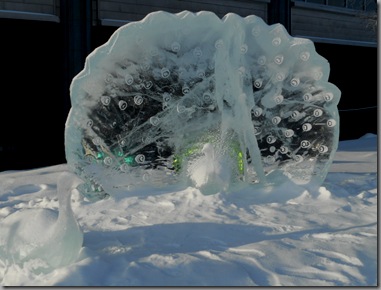 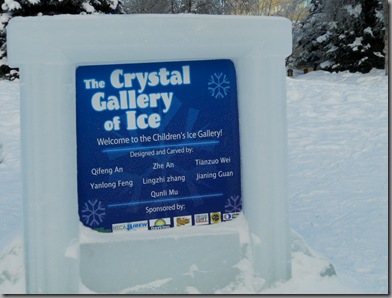 I was pleasantly surprised at the skill on display.  I was less pleasantly surprised at how cold it was, plus wind.  I have no number to scare you with, only this: my fingers became so numb after a few photos that I (born here) was literally compelled to exit Town Square post-haste and enter the nearby shopping mall where I became just slightly less distracted than a texting teen driving in traffic and bought things I thought I needed, but on second thought, yes, I still needed.  After which I had a hot pretzel and ersatz melted cheese (to fully thaw the fingers, you understand), and then went back outside for a few more pictures at the behest of my by now overheating children.  (You try trudging around a shopping mall in a snowsuit, grumped a wee one.) 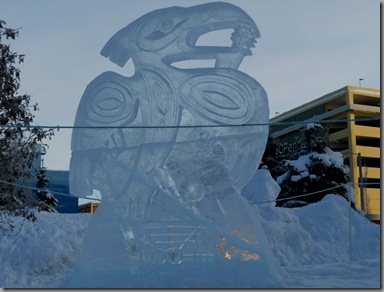 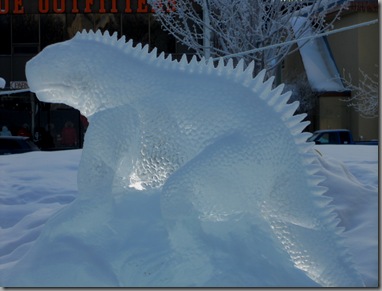 The picture above is probably about as close as this beast from the Galapagos (no doubt someone will let me know if I’m wrong here) will ever get to the frozen north I call home.  But I suppose this whole ice carving idea is also a lesson in making lemonade from lemons.  If you can’t beat the cold temperatures, make an ice sculpture.  Or move to Arizona and tend cacti.  The smart Alaskans do. 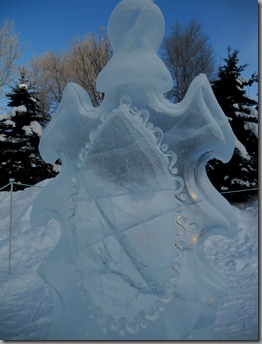 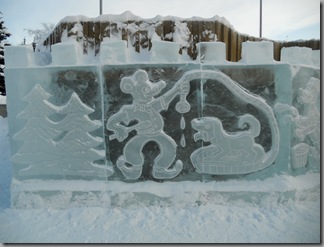 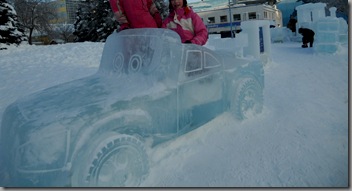