No one ever accused the Last Frontier Gardener of being too sensible.  Being in one’s right mind may in fact bar one from living in Alaska more than, say, 12 days.  As I am going on my 36th year in this state, calling my sanity into question is something even I do (and in winter on a daily basis). 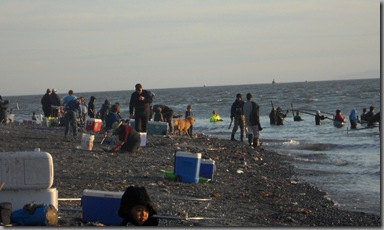 Luckily, I am not the only nitwit around here.  Approximately 75% of Alaskans are right there with me.  How do I know?  Not by the prevalence of blue tarps or junk vehicles, which is damning to be sure.  My made-up statistics are drawn from the fact that the hordes were drawn like locusts to the mouth of the Kenai River last weekend to dabble in that bipolar-like little pastime we call dipnetting.  For my fascinating coverage from last year, go here.

But the Kenai River is a world-class fishery, you say, what’s the big deal here?  Of course people are going to be drawn by the thought of catching 10, 40, 100 red salmon in a day or two.  (What they do with 100 salmon is a whole other essay.  The Last Frontier Garden hubby purses his lips and mutters things that sound suspiciously like “going to get freezer burned before they eat it” or “half of it’s just going to get thrown out in May.”)

The problem here is this: mixing hundreds or even thousands of tired (do you know how long we drove to get here?) Alaskans (dipnetting is a residents-only type of harvesting fish) of varied backgrounds together on a beach with 20 foot-plus net poles, sharp filet knives, fish bonking clubs, and large rocks is bound to result in some kerfuffles.  Or as they say in Hollywood, there will be blood.  We need a few rules. 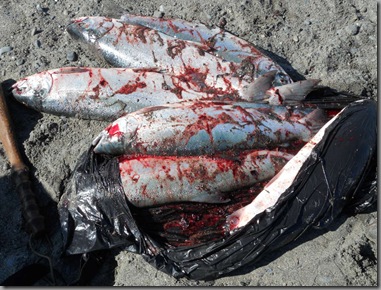 It started out innocently enough, a wish expressed for some salmon in the freezer.  By early summer, bulletins go out by radio, TV, and internet.  The tension grows.  Orson Welles could be announcing over the airwaves that the aliens have landed and are sucking our brains out and we’d be a less captive audience.  And then the moment arrives: THE FISH ARE IN!  By the time the sonar count from 19 miles up the river has been announced, it’s a free for all.  An amazing 230,000 salmon already up the river to spawn by the third week in July!  Emergency order by those in the know: dipnetting doesn’t close from 11pm to 6am, no sir, open 24 hours a day!

I won’t describe the traffic.  Well, maybe a little, just to give those new Alaskans who haven’t yet experienced the joy of heading down to the peninsula to fish: “appalling” about covers it.  The words our driver used were somewhat less civil and quite a bit more eloquent.

A vintage brown motor home from the 70’s, loafing along 20 mph under the limit was a particularly blatant offender, but was eventually passed by seven vehicles, two of which were other motor homes.  Those widely ignored road signs, the ones that read “A delay of 5 or more vehicles is illegal.  Use pullouts.” is expressly for motor homes (and Subarus in my opinion, tell me if I’m wrong) clogging up traffic on long drives.  And the few passing lanes that appeared on our journey were turned into temporary autobahns of desperation, with every vehicle racing ahead of as many motor homes as possible and trying not to glance at the speedometer to see how close to becoming airborne they happened to be getting.

Alas, we did not take flight and the brown motor home conquered us (and those behind us) all the way through Cooper Landing and Soldotna.  I see I’m losing focus here and must firmly wend my way back to writing about dipnetting.  Drat.  As I am under limitations here (your attention span being an important one) I will cut to the chase.  Here are Christine’s Rules For Dipnetting, or Dipnetting for Dips. 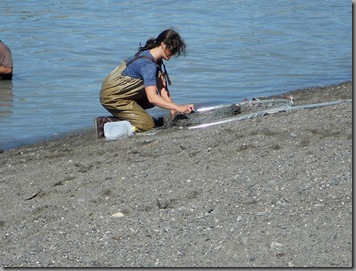 1. Equipment.  Basics include a dipnet, cooler, ice, filet knife, fish bonker, and waders.  Some folk think these are optional.  I noticed several persons fishing up to their shoulders sans waders.  Did I mention we live in Alaska and the water is what we refer to as cold?  Lots of things tend to shrivel after awhile in cold water, my desire to fish being one of those things.

Some had no fish bonker, and clouting a slippery, jumping fish in the head with a rock is more difficult than it sounds.  The LFG hubby lost his filet knife in the hubbub on the beach after dark (luckily he’d already cut up 80% of our fish) and his folding knife was a poor substitute.  Bring sharp knives, you won’t be sorry.  If you catch no fish, they will come in handy for cutting up duct tape or slicing a hot dog or something. 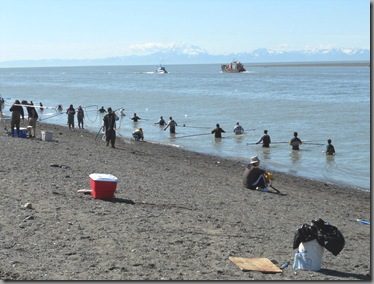 2. Friends.  Family is acceptable, too, I suppose.  Remembering just where you put your fish (because you have to get right back into the water or lose your place, depending if the fishing is hot or slow), braining the fish, putting in a cooler, etc. are rather time consuming things to do, especially when the beach is covered with hundreds of people trying to do the same thing.  And salmon tend to look the same.  “Hey, that’s my salmon!”  “No, that’s mine!”

Or even worse, not noticing when the tide is coming in and it washes your landed fish away.  Save yourself some stress and have someone sit on the beach in a camp chair with a cooler and the bonker.  This might be, perhaps, someone who has no interest in fishing (gasp) themselves.  Some industrious sitters (not me) cut the fish up as they were caught.  Saves a lot of time. 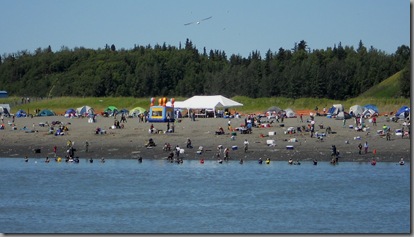 3. To walk or not to walk?  Decide whether you are a walker or a stander and get in the right area.  The poor LFG hubby blew a gasket or two over dips that would insert themselves and their nets into the middle of an area where people were walking against the tide in a line, and just stand there.  The line then comes to a screeching halt, no doubt with a fond desire to keep going right over the new stander and rejoin the walkers on the other side.

For those that wish to stand, there are standing areas for that, usually on either side of the walking area.  The point is, look around before you put your net in: what are the other dipnetters around you doing?  Remember about those sharp knives and tired drivers, we don’t want to push anyone over the edge now, do we?? 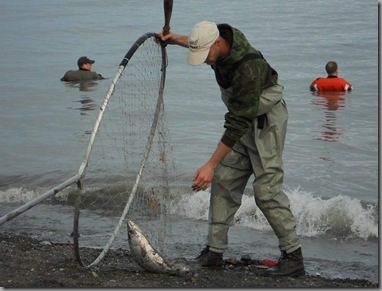 4. Be aware.  Of others, that is.  There are net people. Knife people. Club people. Little people. Dogs. Coolers. Fish. Lots of things to trip over or get struck by.  Why I myself was struck with a pole and net from an overanxious dipnetter hauling out her catch.  And I was sitting halfway up the beach in a chair minding my own business.

Just know this: the dipnetters probably aren’t paying much attention as they haul fish out, so if you must walk on the beach near the water, keep one eye on them and the other on the beach itself, which is littered with nets, etc.  Or just go back to the tent and read a book, which I would have done, had not my electronic reader stubbornly refused to cooperate.

Well, four rules is about three too many for Alaskans, so I will just have to wait for your memories to fade by next year to write my Advanced Dipnetting Etiquette tome.  Oh yeah, we caught 23 red salmon (and one pink salmon, but don’t tell anyone), about three more than I wanted, but about 100 less than the guy next to us.  Fish on!

What activities need posted etiquette/guidelines?  Have you ever told a stranger they were breaking an unwritten rule?