When disaster is imminent

It’s just about that time again in Alaska.  The time of year where you overhear questions like, “How many more times do you think it will snow?” or “Think we’ll have a summer this year?”  And even occasionally “Did you see that darn fool woman from out of state try to pet the moose? What an ultra maroon!”  Spring has sprung here with a stumble and a face plant. And spring, like trying to pet a moose, might sound good in theory, but in execution is a disaster. 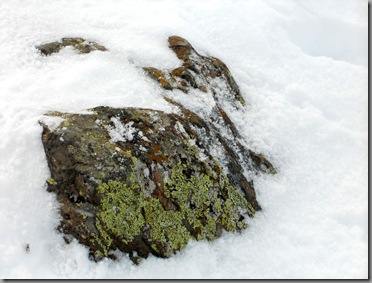 Just how can I tell, you ask, oh reader, that spring has come to the Last Frontier when I still have a fifteen foot high mountain of snow in my front yard complete with snow cave for imbibing the occasional hot cocoa? Three ways, 1. the winter’s road litter, revealing itself slowly after months under the snow, 2. a crocus sighting at the Providence Alaska Medical campus, and 3. I saw a man wearing shorts yesterday.  Don’t judge him too harshly, it was 40 degrees Fahrenheit, which to those unfamiliar with the Alaskan Temperature Denial Conversion, actually feels like 66.5 degrees to all residents of this tundra clime. I’m a little surprised he was wearing his shirt. 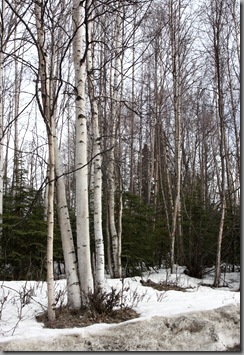 Grumpy bitterness is an old friend of mine, but I’ll explain why she visits so often in the month of March.  (It seems I’ve decided to bombard you with analogies this post, so buckle up.) Springtime in the 49th state is like yours truly during my teenaged years: awkward, not much to look at, but everyone hoping for something better later on. Or maybe it’s more like my toddlerhood: dirty, smelly, and wet, but thankfully just a phase.  There is no way around it, so I’ll just say it. Spring here is ugly. 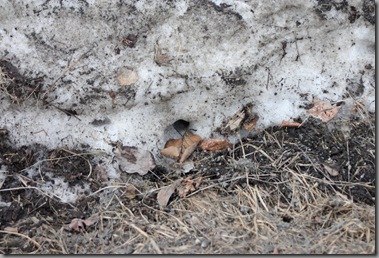 Now I don’t deny that when the dirty snow has melted and the birch tree leaf buds begin to swell, the hazy light green overlay, set against a backdrop of the purpley-blue Chugach Mountains, is rather pretty.  But I still can’t help wishing for more of a bang.  Like, Bang! A thousand daffodils blooming their fool heads off in an eye popping yellow.  Or Bang! Hundreds of cherry blossoms unfurling their pink petals to my sighs of appreciation.  Dear readers, this is not meant to be. Our springs are more…subdued.

Springtime in Alaska is: Bang! Puddles deep enough to drown a small musk ox. Abandon all hope ye tikes who walk to school or work. One option: wear a head-to-toe raincoat and possibly a life vest if your freestyle is rusty. This spring will be worse than usual, I predict, because of the record snowfall we’ve had.  Oh, joy. And bust out the water skis. Disaster is damply imminent, I’m afraid.

Bang! Dog poop reveals itself on every street and trail and smells bad enough to wake the dead.  Last night’s walk was like that drill you see the football players do with car tires on the ground. Hop, hop, hop. The dog mines were perky and moist from the melting snow and for some variety, interspersed with the occasional moose or horse doo.  Love it. I’ll wear my muck boots next time I go out for a stroll. Disaster is revoltingly imminent.

I mustn’t forget Bang! The dust from the road sand blows up a nice imitation of The Grapes of Wrath era Oklahoma. People don’t wear sun glasses in spring here for the sun. It’s to avoid being sandblasted in the retinas. (We could market our spring winds as Nature’s Dermabrasion and get all those kids from Jersey Shore up here.) Thank goodness I’m not asthmatic or spring would be spent in a bubble.  As it is my nose just runs constantly.  I am one of those people with a tissue in every pocket of every coat, in every purse or bag, and sometimes in my pants pocket. Disaster is filthily imminent, I tell you (between sniffles).

No cherry blossoms here to herald the season and tempt photographers. No birds atwitter quite yet. And only a bunch of zombie-like, half starving, crabby moose avoiding new-to-Alaskans that think moose escaped from the petting zoo. One crocus in Midtown and my yard buried under snow. Can you tell spring isn’t my favorite season?

*The woman petting the moose was unharmed.  The moose however was at rest and she unsettled it enough to cause it to move away.  Moose are at the edge of starvation this winter due to the record snowfall.  It might have hurt someone else due to fear or anger. Stupid and selfish, my dear.

What is your favorite season? What does spring look like there?