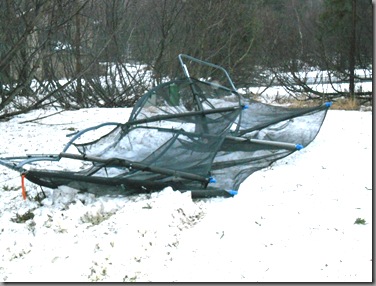 Despite the gloomy sounding title, I guess I’m lucky.  The tree did not crash through the bedroom window, the trampoline did not mow over a pedestrian on it’s way to the neighbor’s ditch, and the computer is merely in a coma, versus flat lined. However, a blizzard has just been announced by the National Weather Service, so there’s that.

Our desktop (say that slowly with me now, children: “desktop”) computer has been with us many years.  The way this machine behaves, you’d think it was a thrift store find, but my husband assures me we bought it retail, at about the time the Russians sold Alaska to the United States of America.  I am now typing on newer technology: a laptop that was manufactured circa Alaska gaining statehood (we’re the 49th state, in case you were wondering).

The old desktop was very slow, and occasionally provoked me by freezing up or flat out refusing to be switched off.  Writing blog posts was especially agonizing.  The race was on to get my nonsense typed out before the great beast froze up on me.  Something once eminently useful, now a piece of junk.

When people think Alaska, “hurricane” is not the first word to spring to mind.  Maybe “earthquake” or “wild animals eating one’s garbage” or even “cold, miserable, dark wasteland on the tundra” though I’m just speculating, of course.  Mother Nature threw us a curve ball yet again last Saturday, blowing in an unseasonal, warm(ish) wind from the south.  Not a gentle wind, mind you.  I’m not opposed to a little gentle wind as long as it gives a little body to my limp mane.  This Chinook wind took things to extreme.

We prepared as best we could as the wind started up.  Then the rain/snow came. Sideways.  The front window sprung a leak.  Mister Fix It was blown off his ladder trying to seal it with silicone it in the dark.  Don’t worry, he is tall, so the landing was shorter.

However, that naughty trampoline rolled or flew or got up and walked through a formerly impenetrable thicket of alders and landed in a heap at the neighbor’s.  What little form and function left was reduced to nil after the head ATV driver pulled it back through the alders with a winch attached to the four-wheeler.  It is now completely retired from all jumping activities (see above picture), and on a related note, we have acquired ample metal to practice welding modern garden art.  Something once useful, now a piece of junk.

We awoke (if you can call tossing and turning, and waking at every big gust sleeping) to a tree blocking our garages and driveway.  The tree was kind enough to break halfway up the trunk, so there was a mere thirty feet of it to fly through the air and land on our roof and bash our (new) gutter on it’s way down.

As we walked through the ‘hood admiring the damage the next day: at least a dozen large white spruce, a couple of which were blocking driveways or roads, a few birches, and an entire roof of shingles on one home.  Poor sap, hope he had insurance.  A little further down the hill, I spied a chimney blown over, a first for me.  Those of you in windy areas, no laughing now!  I’ve never experienced winds over 100 mph (I’m not counting those breakneck amusement park rides at Universal Studios) in my life, so the wonder and destruction of it all amazes me.

*Update: as I tap this masterpiece whilst my house is literally shaking from the wind, we are enjoying the first blizzard of the season, with 1/4 mile visibility.  And along with another dose of 100mph winds.  Is the Apocalypse near?  I hope not, I haven’t tried growing artichokes yet….