At the Alaska State Fair, of course.  What, you were thinking it would be parked at Disneyland?  (That one is a stand-in to fool the tourists.  For the real deal, visit Alaska.)  The carriage is in its original condition, that is to say, it looks like a pumpkin before the “bibbety bobbety boo” and wand waving magic. 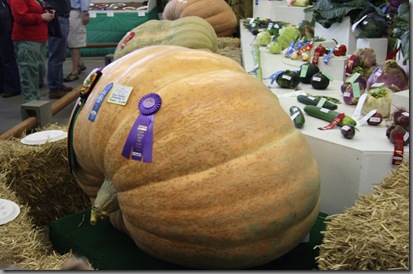 I just can’t fathom how much TLC it takes to produce an eleven hundred pound behemoth like this.  In my neglected vegetable garden, at this moment, there are celery quietly going to seed, two mournful cabbages, three slug-ridden lettuces, and some zucchini plants that decided not to do anything aka produce zucchinis.  So I’m guessing actual care is required.  The water demands of such a thirsty giant would probably tax Eklutna Lake (one of our city’s water sources).  Really, how does a pumpkin top 1000 pounds?  Since I’m not big into actual research, I may never know, but check this article in our local paper for some bona fide information. 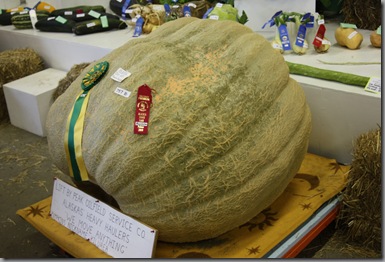 Cinderella’s carriage was grown by Mr. Dale Marshall of Anchorage, and weighed in at 1101 pounds, a new Alaska State record.  Other contenders for chauffeuring the future princess tipped the scales at 757 and 902 pounds.  If she ever tires of the pumpkin mode of transportation, she might recommend her fairy godmother put a spell on some of the other giant vegetables seen in the fair town of Palmer, like the enormous 24.9 pound rutabaga.  And was that a 16 pound zucchini I spotted?  Honestly, some people have all the luck (because it couldn’t possibly be effort and skill)! 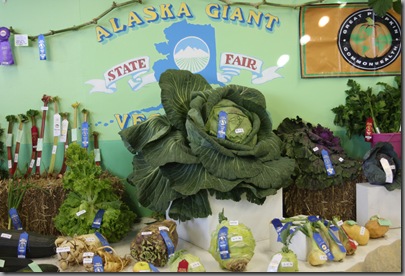 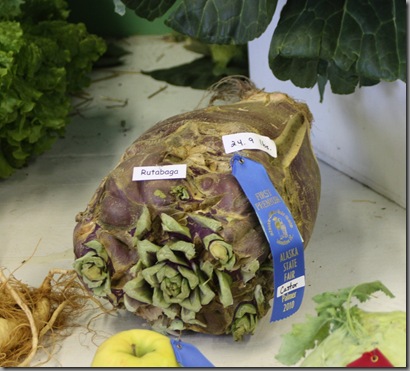 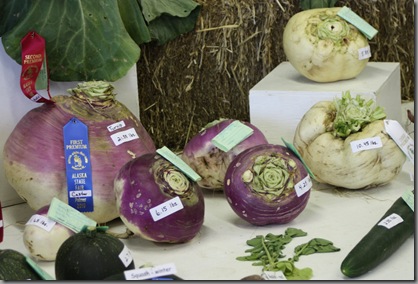 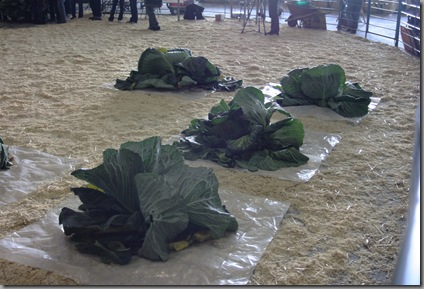 Any mice to pull the pumpkin coach, you ask?  No mice (that won ribbons, at least) but just about every domesticated animal was there to vie for honors.  Cinderella could have her pick of cows, goats, sheep, ducks, chickens, rabbits, pigs, a turkey, or geese instead.  I’m voting for the bunnies.  Is there anything cuter than a bunny? 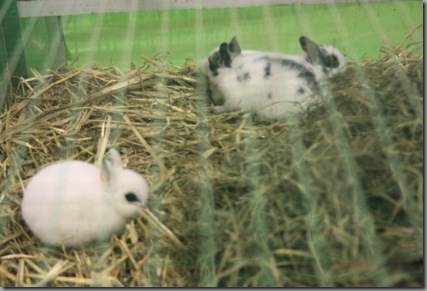 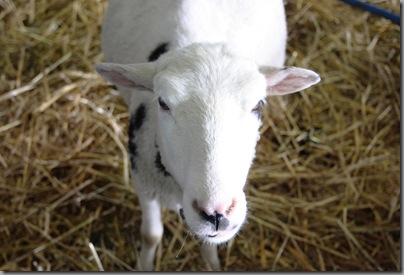 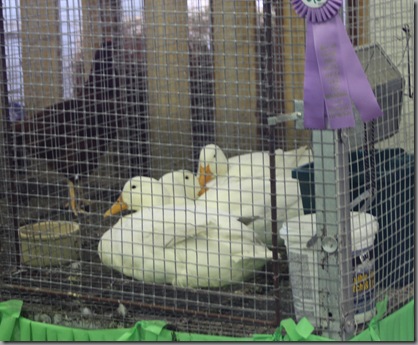 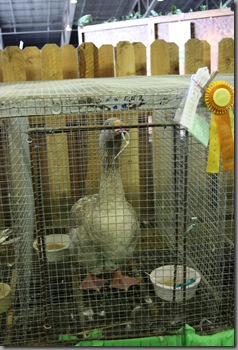 As a kid, the geese and turkeys at the Fair always freaked me out (obviously I wasn’t raised on or near a farm), and I see I haven’t much changed.  One loud honk or hiss and I’m moving on to the next cage.  I’ve heard you can tell a lot about people by what they are afraid of but I’m not quite sure what fear of large barnyard fowl says about me.  Perhaps that’s why I eat turkey with such zest. 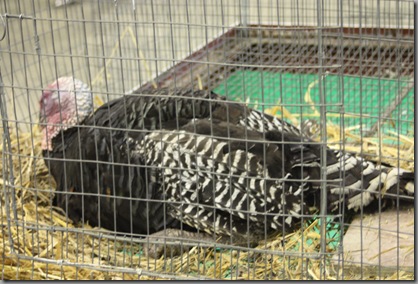 If Cinderella decides to take a break from choosing her next set of wheels, she could wander over to the show ring.  I well remember the year of The Great Pig Fight in center ring.  A handful of 4-H kids showing their pigs for the judges, nothing out of the ordinary, then BAM!  Angry, squealing, lunging, open-mouthed, and sharp-toothed drama.  My eyes grew wide as I thought nervously, '”Will they shoot the pigs?  Shut the barn doors?  Get the tranquilizer gun?  Do pigs eat children?  Are lassos involved here?”  My city-kid self was in fight or flight mode. 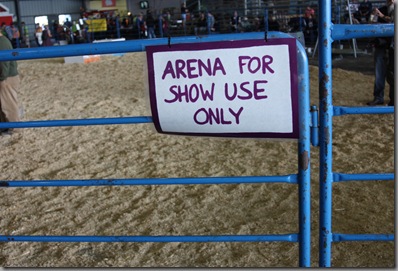 Thankfully, the pint-sized handlers didn’t even bat an eye.  Crisis was averted with pig boards, handy barriers the children carry for separating the pigs (see picture below for some multihued samples).  I guess if you can’t see your deadly pig enemy, you can regain your pig manners and resume the walking circuit.  And get some much needed rest after all the excitement. 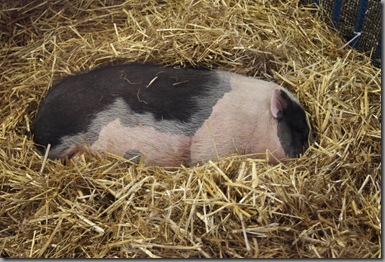 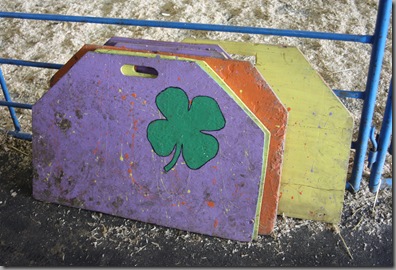 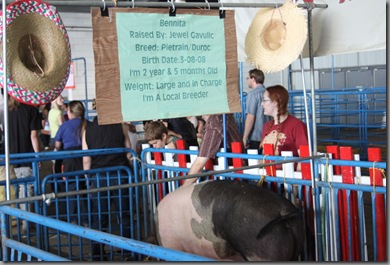 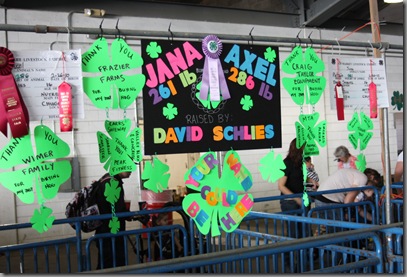 There is a bit more to the Fair beyond the livestock and Cinderella-sized vegetables, including an unexpected and stunning perennial garden with some of the most unusual plants to be found in the 49th state, but that’s for next time.  Tune in for rides, food, exhibits, and a flower contest extravaganza.  See you in Palmer! 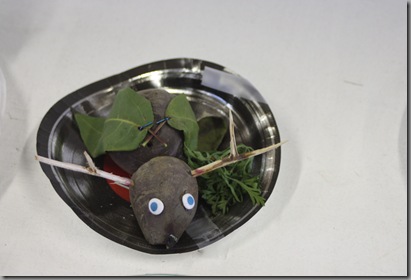 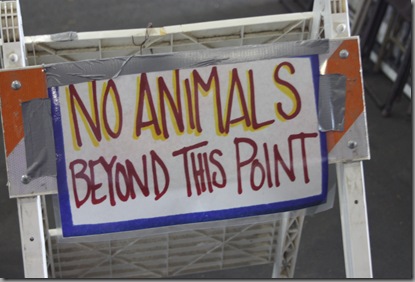 What barnyard animals are you afraid of?  Any giant veggies in your area?