Snow White was a bit of a dope, wasn't she?  Depending on who is doing the telling, she accepted not one, but three different poisoned items from a stranger.  The dwarves bailed her out for the first two bonehead mistakes, but the third time, when she ate a poisoned apple, they couldn't figure out how to help her.  So they did what any normal persons would have and encased her in glass in the forest.  This story has a classic moral: be on good terms with your stepmother.  And never, ever be better looking. 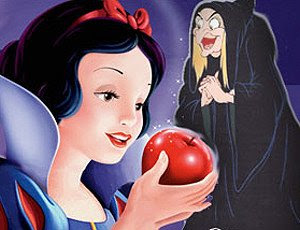 [Photo Credit]
Snow White might not have been the sharpest tool in the shed when it came to her stepmother, but the dwarves had the wicked queen's number.  They warned S.W. not to talk to strangers because they knew the queen had it out for her.  They couldn't be with her all the time to protect her from her own stupidity; they had day jobs in a mine.  [You will recall their unassailable financial advice, from the classic Disney movie: "It ain't no trick to get rich quick when you dig, dig, dig with a shovel or a pick, in a mine.  We dig up diamonds by the score, a thousand rubies, sometimes more...."]  Between grubbing up jewels and doing triage with a comatose S.W. on a fairly regular basis, they must have been busy. 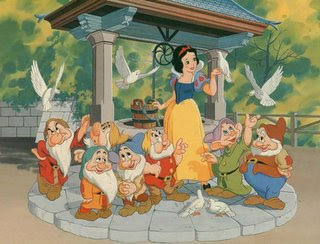 [Photo credit]
Even though these seven chaps were eminently useful, it's a small miracle (no pun intended) they turned out as well as they did.  What kind of cruel parents name their kids Dopey, Lazy, Sleazy, Bashful, etc.?  That's just asking for a host of psychological issues to manifest themselves.  At first glance, Doc lucked out in the naming lottery, but perhaps Doc is short for docket, dockyard, or document.  But all in all, they seemed to lead a charmed life: a private cottage in the forest with buckets of gems and a princess for a housekeeper.

Certain breeders (I won't name names) seem to have run out of creative steam and gone for "apt" instead.  Witness Picea glauca 'Tiny', Picea abies 'Midget', Picea abies 'Dumpy', Cedrus deodara 'Pygmy', Juniperus communis 'Miniature' and Pinus sylvestris 'Scrubby.'  Just makes you want to dash out and locate these little gems, doesn't it?  Thankfully, more than the mere pedestrian are in evidence.  Plenty of magical or mythical creatures are included: Picea glauca 'Elf', Picea x mariorika 'Gnom', Picea glauca 'Pixie', and Chamaecyparis obtusa 'Leprechaun' and 'Golden Fairy.'  Disney seems to have a small market share in the category with Picea abies 'Cinderella' and Abies koreana 'Pinocchio.'  And apparently Doc got into the plant breeding business, for we have Tsuga canadensis 'Doc's Choice.'  I feel I also must mention Chamaecyparis obtusa 'Alaska,' even though it resembles the offspring of lichen and dryer lint.

Why would I want one of those dreadful things, you may ask.  Good question.  (First let's get some technical nonsense out of the way, courtesy of the British Conifer Society: "dwarf" means a growth rate of 1-6 inches a year and a height (after ten years) of 1-6 feet.) How about some texture, color, shape, and winter interest in your garden?  Don't take my word for it.  No less an authority than Adrian Bloom, plantsman and horticulturist of worldwide repute, has written Gardening With Conifers for you doubters.  He makes a convincing argument that dwarf conifers are indispensable in rock gardens, troughs, containers, and wildlife gardens.  Those are a just few reasons to plant botanical friends of Snow White.  Their smaller size merits them a place in today's smaller lot sizes, as well. 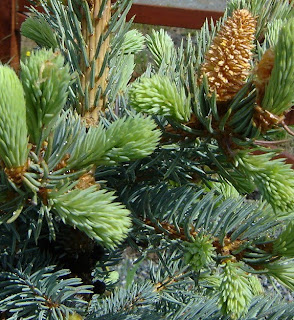 Picea glauca 'Fat Albert' with a cone.  This evergreen is actually in the "semi-dwarf" category of growth.
The dwarf of choice, or at least, of circumstance, in my yard is Picea 'Fat Albert.'  I have had no less than three comments about how I've planted it too close to the house.  "Those things'll top thirty feet!" said one sage garden tourist.  I must have taken my Paxil that day because I managed to stop gritting my teeth long enough to mention it was a semi-dwarf that would mature at about fifteen feet.  I expect the root restrictions (it's in a raised bed surrounded by timbers) and competition from copious neighbors will curb it a bit, too.  I would love to add another dwarf to the mix, but finding them here is a bit of a challenge.  We are, generally speaking, a bit behind the times up here when it comes to bantam evergreens.  Not much is available selection-wise at our local nurseries.  (I would love for some enterprising Alaskan nursery to make me eat crow on this.)  For some pictures of a lovely nursery in a warmer clime (and some neat propagation and field shots) that specializes in dwarf conifers, try here. Their mail order/internet site is here.

Alas, I have just remembered I do have a larger dwarf population that just one, in the guise of three cheerful specimens of Picea abies 'Ohlendorfii', pictured below, with Calamagrostis brachytricha in autumn.  But that is (really) all the dwarf evergreens I have.  Honest.  Just like Snow White, I could use a little help now and again from a few diminutive chaps around the garden.  On my wish list of useful dwarves (or is it dwarfs?): Picea glauca 'Rainbow's End' and 'Acrocona Pusch'.  You? 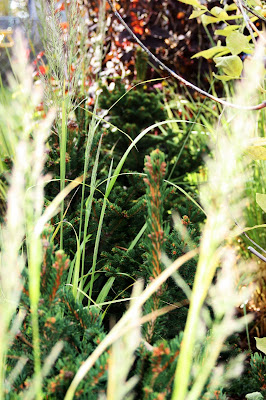 Have any small-statured evergreens?  Or perhaps treasured memories of Snow White that I have sullied with my bit of fluff?